We bid farewell to Bonnie Scotland and looked back on what was a Fantastic start to our journey..
If you could give a TripAdvisor style rating, Scotland would definitely achieve 5*****

Heading south down the M6 we glanced right towards The Lake District and reminisced on yet another of the UKs “Gems”
As we have been there on many occasions before, we carried on in search of new adventures..

We overnighted at a Brit Stop just south of Kendal.. A pub called The Strickland Arms.. A Lovely Olde Worldy pub with delicious food, and with a couple of drinks each the bill came to £40.. The car park was on a bit of a slope but the setting was tranquil..
We dipped back into Kendal and did some laundry and gathered a few bits and bobs at Halfords and then headed for our next destination, Wales…

We parked up in Chester at a large city car park which was well used by the Motorholming fraternity..
It was there that our plans took a change of direction when we received a message from my cousin Elizabeth.. We were only 20 miles from where her and Alex lived, so we up’ed chocks and set off for Whitchurch..

We had last seen Elizabeth & Alex at Mams funeral back in March, where they had given Geordie, Geoff and myself a beautiful framed picture of mam winning a “Miss Lovely Legs competition, back in the 70s at Pontins..
It was agreed that we should stay for 2 nights so we unpacked our overnight bags and enjoyed a “proper” bed and shower for a couple of days..

The following day we were treated to a day out at Blist Hill which is like stepping back in time.. An open air Victorian museum, set in the Ironbridge Gorge.. A fabulous few hours later we pulled up in Ironbridge itself, which is a stunning little village, set on the river Severn.. It takes its name from the 30m cast iron bridge built in 1779.. Its a must for Bridge Enthusiasts..
Another sumptuous meal out that evening and lots more reminiscing, followed by another night in a proper bed lol and we bid our lovely hosts farewell.. An open invitation to join them in their winter retreat in Tenerife accepted, and we were on our way once more.. 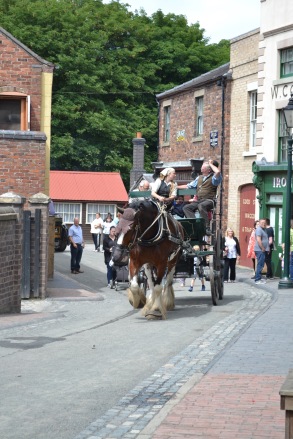 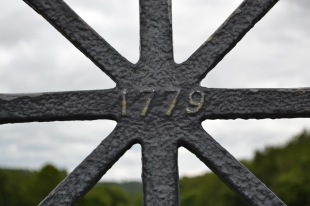